Before revealing our 2019 Scotland travel plans I would like to take you on a journey back through 2018.


Our first trip to Scotland took place in March. As I already wrote a two-piece article about this journey I will simply give you a short summary in pictures. You can find the respective posts here and here.

We stayed at Sandford Country Cottages again where Evelyn and Ralph gave us a guided tour of the main house. We also went back in November - just because we feel so welcome there. We had a lovely evening involving snacks and drinks as well as animated discussions with our hosts and the guests staying in the other apartments. 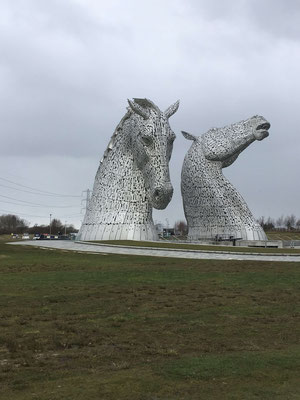 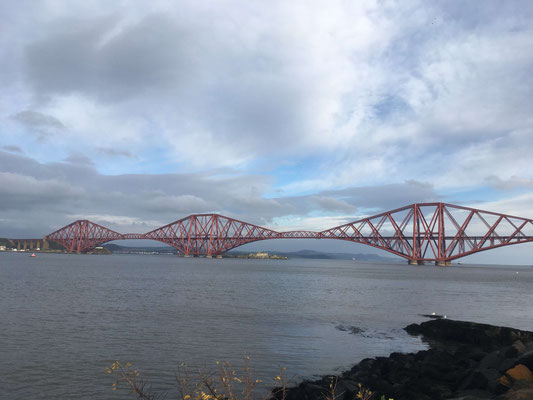 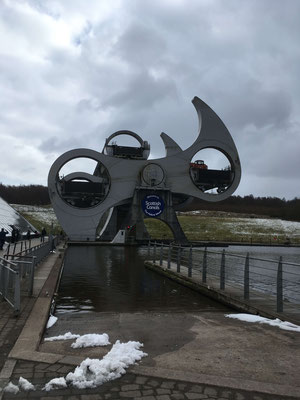 We visited the Forth Bridge, the Kelpies and the Falkirk Wheel... 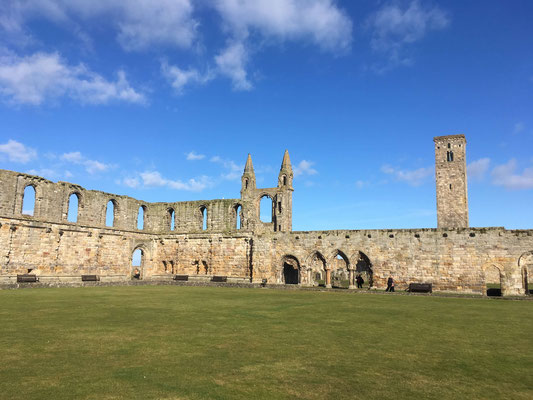 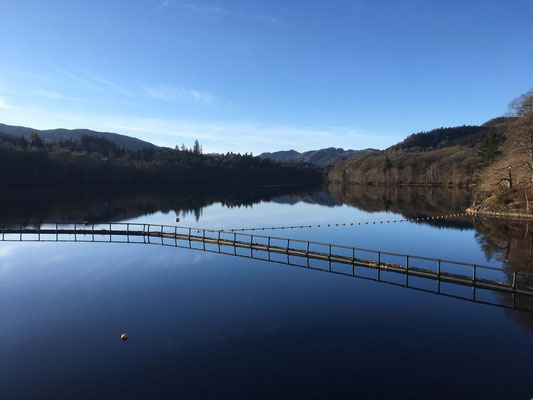 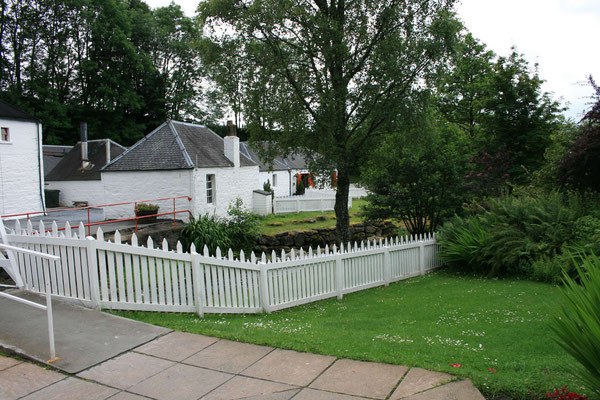 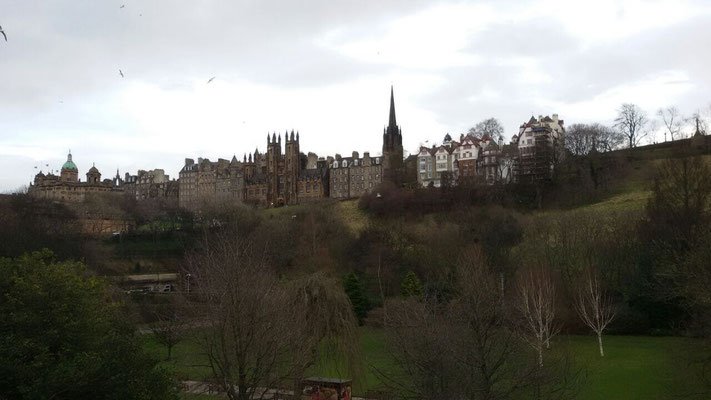 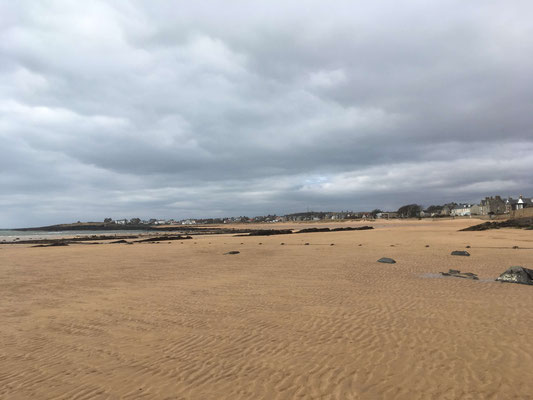 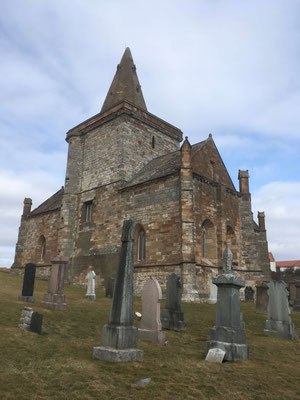 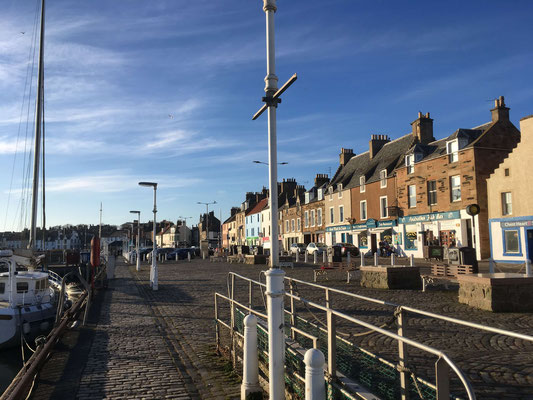 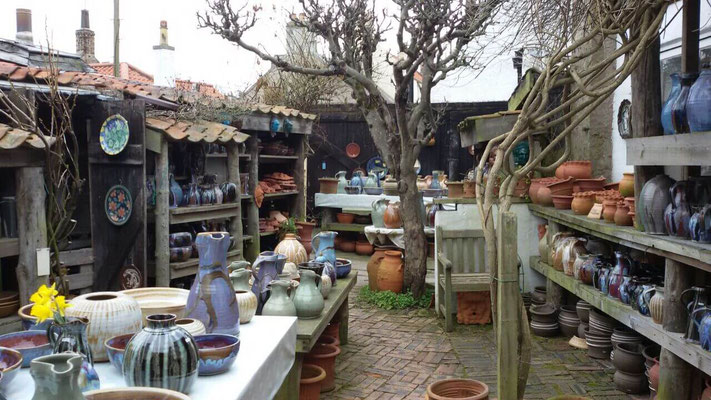 ...the coastal villages of Elie and St. Monans, Anstruther and the Crail Pottery...

Jürgen then went to the Islay Festival at the end of May/beginning of June without me - no need to complain, though, as I went hiking on Italy's Amalfi Coast in the meantime ;-) - and we returned to Scotland together in November. We visited a few places we didn't know yet or we went back to places we last visited years ago.

The V&A (Victoria & Albert) Museum in Dundee opened on 15 September 2018. It is a subsidiary of the V&A Museum in London that was founded in 1852 and named after Queen Victoria and Prince Albert.

The museum in Dundee was designed by Japanese architects Kengo Kuma & Associates. Its exterior was inspired by Scottish cliffs and looks entirely different at any time of day. It is located on the Dundee Waterfront right beside the RRS Discovery (Discovery Point) and creates a great contrast to the old ship..

You can take a look at my blog post about the Discovery here.

The Scottish Design Galleries feature all kinds of historical and contemporary Scottish design from architecture, fashion and furniture to video games. The exhibits are from museums and private collections throughout the world. One of those exhibits is the Oak Room that was designed by the famous Glaswegian architect Charles Rennie Mackintosh.

Admission is free except for changing exhibitions. Tours can be booked at the reception desk.

The museum is wheelchair-accessible and assistance dogs are welcome. There are induction loops for the hearing-impaired and special tours for visually handicapped or deaf visitors. All floors can be reached by lifts. All levels have accessible toilets and baby changing facilities. According to the museum flyer breastfeeding is welcome throughout the building.

The museum has a café and a shop on the ground level and a restaurant on the first floor. We were there on a weekday in November and would have had to book in advance as the restaurant was completely laid out.

The exhibition deals with the cultural effect of ocean liners on an international level, concentrating on engineering, promotion, interior design and lifestyle aboard - from the "Great Eastern" to the "Queen Elizabeth 2".

A Pictish fort was built north of Dunnottar in the 3rd century and Saint Ninian erected a place of worship in the 4th century.

Dunnottar Castle certainly fell on several hard times during the centuries. After being raided by vikings in the 9th century and being destroyed by William Wallace in the 13th century, the castle was owned by the very influential Keith family. In 1392, Sir William Keith built the Tower House which is still there today.

In 1562, Mary Queen of Scots visited Dunnottar Castle for the first time, returning two years later with her son, the future James VI., who visited Dunnottar again several times later on. During the Civil War in the 17th century, Oliver Cromwell laid siege to the castle for eight months before the inhabitants finally surrendered... - but not without smuggling the Scottish Crown Jewels out of there first.

In 1685, 122 men and 45 women (the so-called "whigs") were thrown into the vault, because they refused to accept the king as head of the church. There were no sanitary facilities and food or drink had to be bought from the guards.

After the last Earl Marischal George Keith was accused of treason, Dunnottar Castle was sold to a mining company in 1717. This company gutted the building and only left its shell. In 1925, the Pearson family bought the castle. They restored the building and opened it to the public.

The current admission fee is 7 GBP for adults and 3 GBP for children. A family ticket is 17 GBP (January 2019). Dunnottar Castle also has its own smartphone app.

As you can see we had very fine weather during our visit to Dunnottar Castle in November!

Unfortunately, the weather wasn't as nice when we were visiting Scone Palace in Perth so we took a look at the antiques fair that was taking place in the building. There is a no-photo policy in the palace.

Scone was already used as an important religious gathering place by the Picts and there was a Christian church later on. The former village of Scone once stood on the palace's grounds, but was moved by two miles when the medieval mansion was replaced by a gothical palace in 1803.

Scone Palace owns a significant private collection of porcelain, furniture, clocks and ivory and has a beautiful park in which you can find a Mercat Cross (Market Cross) which marked a place that was allowed to hold a regular market. There is also an old cemetery and a 16th century archway that once was the entrance to the city of Scone. I especially like the so-called "Murray Star Maze", a star-shaped labyrinth of green and red beeches cut as hedges.

Scone Palace is open from 30 March to 31 October and only opens for special events in winter. Admission varies between 8.75 and 12.50 GBP and you can purchase family tickets for 42 GBP.  Should you only want to visit the garden tickets cost between 5.50 and 7.50 GBP and a family ticket is 25 GBP (January 2019).

Stone of Scone (Stone of Destiny)

There are many legends about the Stone of Scone. Presumably, the stone came to Scotland from Ireland and was used as the coronation stone of the Scottish kings. In 1296, Edward I. took the stone to Westminster Abbey and had it installed into the so-called "King Edward's Chair". So far, Queen Elizabeth II. was the last monarch to be crowned on this chair.

Coronation ceremonies were still held on Moot Hill after the stone was brought to Westminster Abbey, one of the most famous crowned heads being Robert the Bruce who is buried in Dunfermline Abbey.

In 1950, four students stole the stone from Westminster Abbey, breaking it in two pieces in the process. They took the bigger piece to Scotland. The smaller part was taken to a Glaswegian stonemason who repaired the stone. The British Government started a big search for the missing piece of the stone. It was found on the altar of Arbroath Abbey on 11 April 1951 and returned to Westminster Abbey. Of course, there were rumours that this wasn't the original, but a copy...

In 1996, the stone was finally restored and sent to Edinburgh Castle where it can be visited - unless there is a coronation ceremony in Westminster Abbey during that time... ;-)

In Aberdeen, we just took a stroll through the city. Due to the many granite façades Aberdeen is often called "Granite City". If you have been to other Scottish towns you will notice the difference between their sandstone façades and the granite ones in Aberdeen immediately.

We parked at Union Square Shopping Centre which is located at the ferry harbour and has a direct link to the railway station.

Aberdeen is the third-biggest city in Scotland and one of 32 council areas. It developed from the two separate settlements of Old and New Aberdeen and is considered the "Oil Capital of Europe". In previous times, it also had fishing, shipbuilding, textile and paper industry which are now gone.

Marischal College, shown in the picture above, was supposed to be the protestant counterpart of the King's College. Unfortunately, we were one week too early - the Christmas Market was just being set up in front of the building. ;-)

Marischal Square features a leopard sculpture by Andy Scott who also designed the Kelpies at the Helix Park in Falkirk.

To properly see Aberdeen you definitely need more than one afternoon so it will be worth coming back another time.

Broughty Ferry is a suburb of Dundee located at the Firth of Tay. It's a nice little town where you can find a variety of shops, restaurants/cafés, a park, a beach and accommodation.

Broughty Castle was only completed in 1495 while the site had already been fortified in 1454. It has been open to the public as a museum since 1969. As we had such beautiful weather we only took a look at the castle's exterior.

Most of the time, we make good use of our self-catering facilities, but sometimes we also go out for lunch or dinner. This time, we visited "The View" in Newport-on-Tay. Besides the great view to Dundee across the Firth of Tay, we enjoyed a superb dinner consisting of homemade tomato soup with fresh bread, Angus beef strips with mushrooms, mangetout, mustard cream and potato tower as well as chicken breast served with fried bacon, pasta, rocket and parmesan. My dessert was a delicious apple rosemary crumble with vanilla icecream and sauce. 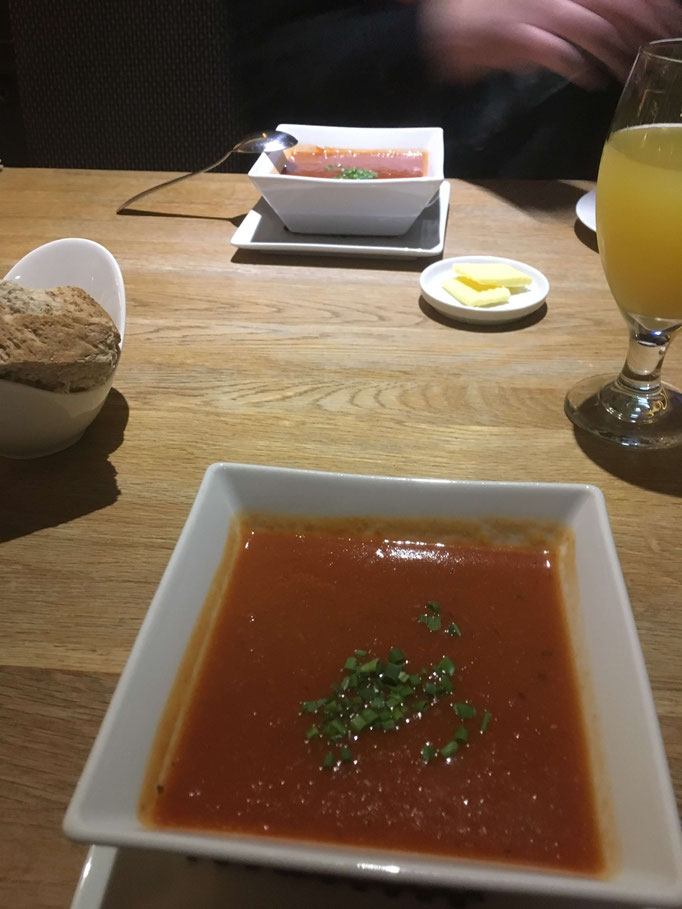 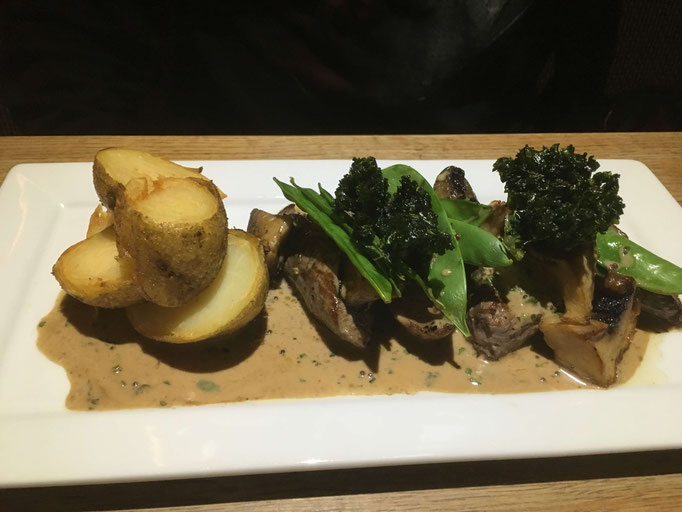 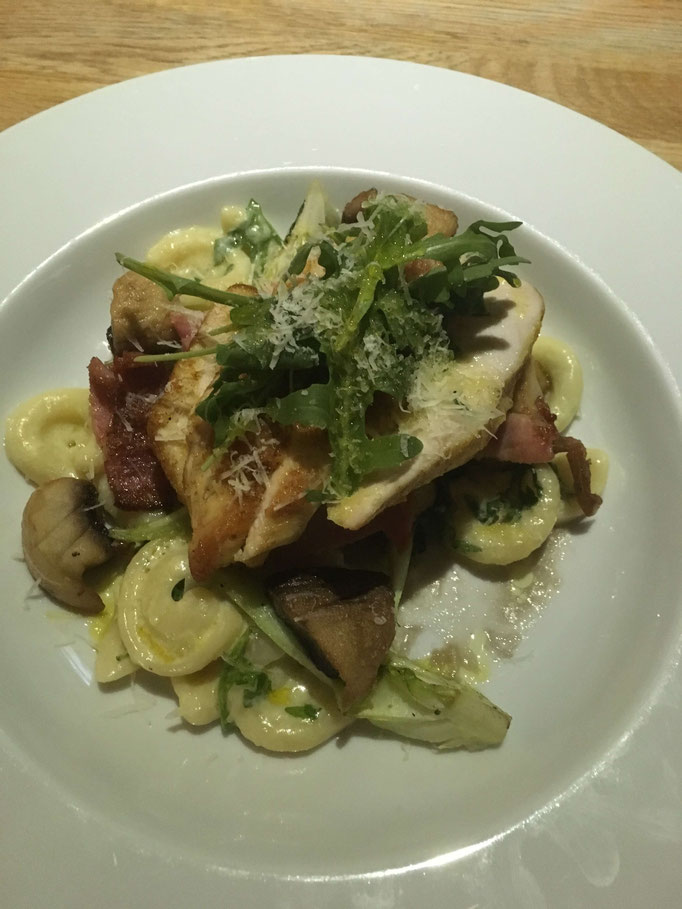 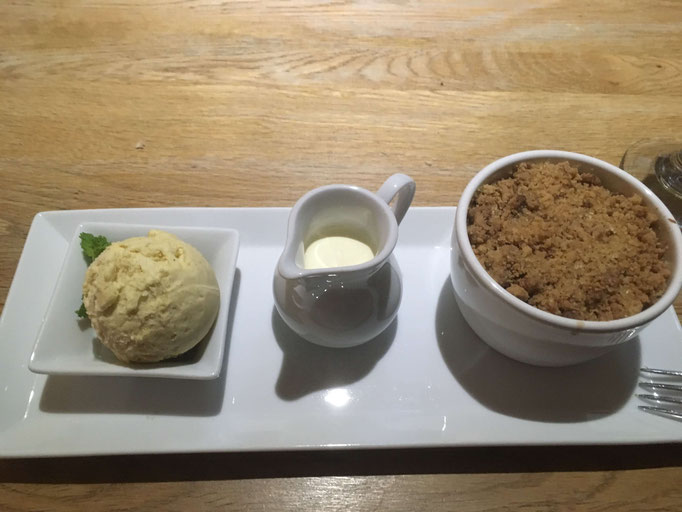 In St. Andrews, we ate at the exclusive "Seafood Ristorante" mainly serving fish and seafood. The restaurant sits almost right on the beach close to the Royal and Ancient Golf Club. The kitchen is open plan so you can watch the cooks work their magic.

I tried my very first oyster here - but I do have to admit that it was grilled... ;-)

Jürgen had Orkney scallops with pork belly and green curry as a starter. Before that, we were served two types of homemade bread which were so good that you didn't need anything but a little butter to go with them. Our main courses consisted of wild halibut and John Dory. Everything was cooked to perfection so you could taste every single ingredient. The restaurant has an extensive wine list. Prices are high, but definitely worth it. ;-) 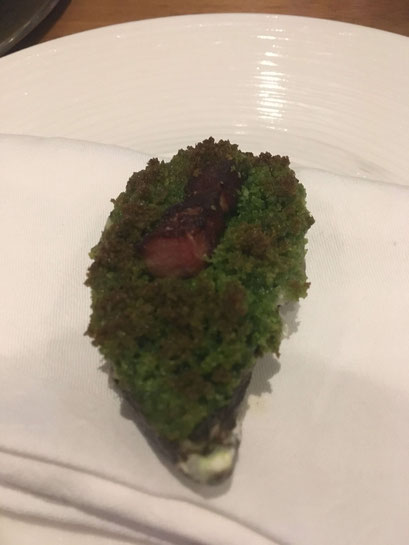 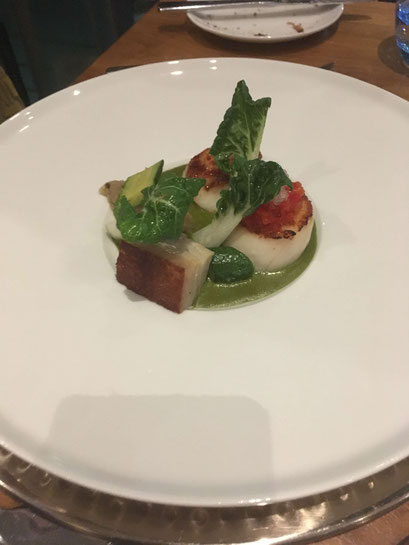 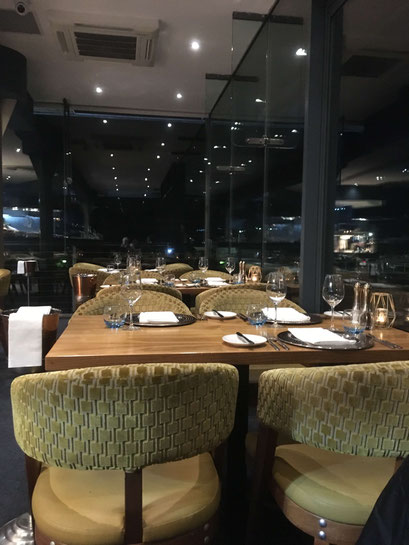 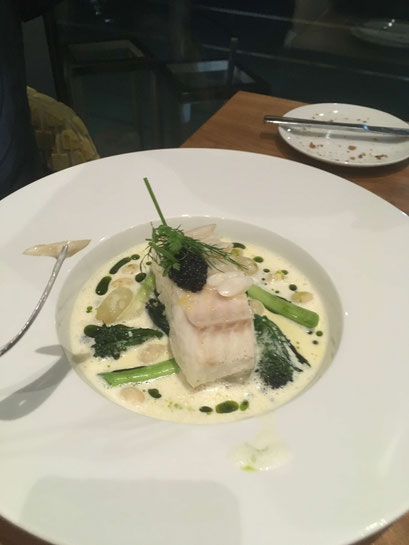 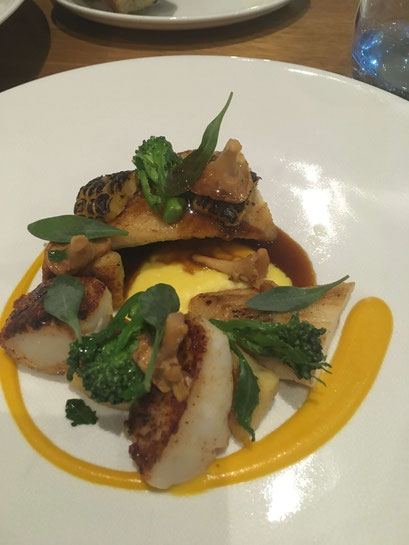 Of course, we are already planning our Scotland trips for this year. We already booked a self-catering cottage on the Isle of Lewis as well as the respective ferries and a "framework programme". As we are going from Amsterdam to Newcastle on DFDS again and do not want to drive to Ullapool (ferry departure to the Isle of Lewis) in one piece we will make two stops on the way. The return trip will be from Tarbert on the Isle of Harris to Uig on the Isle of Skye. We will go to Crieff where we are going to spend another night and return to Newcastle from there.

Everything else is still in the planning phase so I can only go into more detail later on.